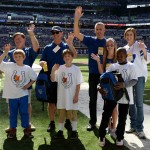 Sunday's Indianapolis Colts vs. the Tennesee Titans game wasn't just a winner for the Colts. The Books for Youth team also scored big thanks to Colts fans donations. An all time high 2,084 books and $1,490 in cash donations from Colts fans was received yesterday.

More than 70 volunteers proudly showed their Books for Youth team spirit sporting tee-shirts and collecting books from Colts fans entering Lucas Oil stadium. Three special foster kids – Keamon, Aaron and Johnathon – were hosted by the Colts with seats on the field. During the third quarter they received books and backpacks from two lucky Colts fans and the Cargo Services Team. The Jumbotron, Scout and announcements in the stadium and a Colts WIN made it a great Books for Youth day. See all the action on our Facebook page. CLICK NOW

Thank you Indiana Department of Child Services and Indianapolis Colts for having Cargo Services as the Books for Youth sponsor.