Moving freight to and from Midwest can be a challenge with major ports thousands of miles away. There is hope. Between the Panama Canal widening project completed in June 2016 and the success (and imminent expansion) of the Indianapolis Rail Ramp, more cost effective and time efficient import options are available for Midwest cargo importers with proper supply chain planning.

The expanded Panama Canal opened in June of 2016. It took ten years and $5.5 billion to double the canal’s capacity by adding a new set of locks to accommodate larger container ships. This has allowed ships more than 2.5 times the size of the current limit to pass through the waterway.

When managing a supply chain, cost is typically top of mind. We have seen an ongoing drop in Asia to USEC ports shipping rates since the beginning of 2016. These low rates are a boon for importers searching for savings. If importers can plan their production schedules for this longer, but more cost-effective transit of about 14 days’ time, they can make an impactful reduction to their overall freight costs. 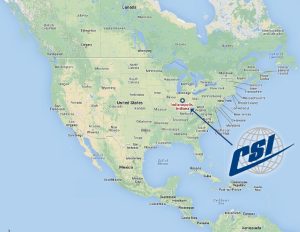 Moving cargo through the Panama Canal to a USEC port also means it can be transported efficiently via rail or truck into the Midwest. Rail ramps that could see the biggest change are Louisville, Kentucky, Memphis, Nashville and Indianapolis. Gulf ports also will benefit from the canal’s expansion, as they will take in more vessels from Asia and South America.

Even without the canal open, USEC and U.S. Gulf ports are realizing increased cargo shipments. Several years ago, there were labor issues at West Coast ports. Companies began to figure out how to reroute their cargo shipments around these issues, and it appears this trend has continued. JOC.com, an industry publication, analyzed data from July 2014 to March 2015 showing an increased share of Asian imports to U.S. Gulf and East Coast ports over the nine-month period.

In 2013, the Intermodal Indiana Rail Ramp opened for business in downtown Indianapolis. Simply called the Indy Ramp by its partners, it provides access to major Asian ports through Canadian and West Coast ports. Utilizing the Indy Ramp, the business boasts an average 22-day travel time for cargo import shipments. It also touts the easy highway access to major interstates (I-70, I-74, I-65 and the partially completed I-69) from its downtown Indianapolis location.

With the continued increase in traffic into the Indy Ramp since it opened, the Indiana Rail Road announced expansion plans for the spring and summer of 2017. Improvements include:

Lights:  Two 125-foot light towers, with high-efficiency LED lights, are going to be placed at the north and south ends of the loading/unloading pad before the end of summer 2017. This will give ramp operators, the ability to work longer hours to maintain fluidity, which could allow for a second shift to be added soon.

Storage:  The Indiana Rail Road acquired access to a six-acre parcel between the container yard and ramp, which will be ready for storage of empties and chassis by April 1. This will take pressure off the U.S. customs-bonded container yard, allowing it to be used for loads.

Transit/Port Construction: Both Prince Rupert and Vancouver Deltaport have entered the final phases of major expansion projects; construction at both ports is scheduled for completion in July. Prince Rupert’s capacity will increase by nearly two-thirds, to 1.3 million units per year. Deltaport will have on-dock rail to decrease port dwell time and create efficiencies for CN operations out of both harbors.

With all the upgrades at the Indy Ramp it might be a good idea for Indiana importers to consider moving some of their cargo via the Indy Ramp. The Indy Ramp can/has provided a great alternative to the traditional Chicago ramp routing. Truck turn times at the Indianapolis ramp average 16 minutes. These turn times in LA/Long Beach take up to two to four hours. In Chicago, a traditional route for Midwestern companies, it could be up to two hours. Many deliveries can be made the same day as the container becomes available via the Indy Ramp.

Simply said, if a company located in Central, Southeastern and Southwestern Indiana wants to be more in control knowing when and where your cargo will arrive, the Indy Ramp is a great option.