Up until now, the primary focus of conversations related to the Covid-19 pandemic in our industry has been on the impact to importers; however, container shortages are impacting exporters. Without a container, the export shipment cannot happen.

Every year we experience a two- to three-week container shortage in the Midwest after Chinese New Year that creates a hiccup to the supply of containers. This year’s shortage has been lengthened and magnified due to the extended shut down at ports in China stemming from Covid-19. The ripple effect of Chinese workers being sick or staying home meant factories shut down, carriers idled ships, and inbound containers collected at Asian ports. These containers are needed in the United States for export cargo. 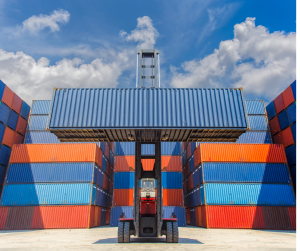 An article from industry publication splash247.com says, “The massive box imbalance brought about by the trade war and then the Covid-19 sees Chinese ports rammed full of boxes waiting to move, while carriers are urgently deploying extra tonnage to other hubs where equipment shortages are now at their lowest levels ever.”

As a result, earlier this month, some of our requests for export bookings, which would load in early April, were declined due to a projected lack of containers in the Midwest. Container xChange, an online platform used to locate containers, maintains the Container Availability Index (CAx) to forecast supply and demand in container logistics for most of the biggest port locations that shows:

To ease the situation in California, steamship line MSC is redeploying two of its largest ships to move containers from Asia to the United States. The the nearly 24,000 TEU ship MSC Mia, which currently holds the joint record as the world’s largest container vessel, and the nearly 24,000 TEU ship MSC Nela, are on the move to help the container imbalance. Despite carriers sending more ships to move containers to their required destinations, the equipment shortage is expected to take time to get better.

According to an article from industry publication JOC.com last week, a turnaround is anticipated in May, with Global Port Tracker forecasting a 9.3% increase, followed by an increase of 9.6% in June. Retailers and non-vessel-operating common carriers are urging customers and supply chain partners to prepare for a surge in cargo by late April, as factories in China continue to rebound. Expect the Midwest to feel the surge with containers arriving by mid to late April.

The Cargo Services team continues to work with customers to find
creative solutions to keep supply chains moving. Contact us now if you need support.