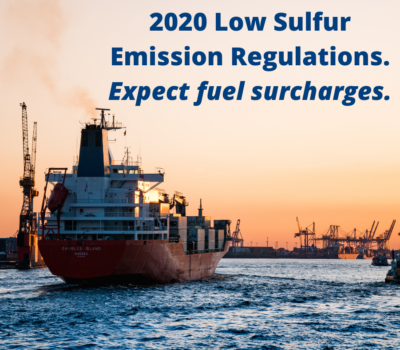 Starting Jan. 1, 2020, the International Maritime Organization will require all fuels used by container ships to contain no more than 0.5 percent sulfur. The cap is a significant reduction from the existing sulfur limit, which is 3.5 percent, and is well below the industry average of 2.7 percent sulfur content. The new regulation will hit the bottom line with expected fuel surcharges.

The requirement that container ship fuels contain no more than 0.5 percent sulfur is a game changer for steam ship lines. To meet this requirement, options are: upgrade to expensive scrubbers; purchase cleaner high-quality fuels; or scrap the fleet to rebuild compliant ships. Either way, the cost will be passed on to you— the customer. Hapag Lloyd estimates cost to the industry, to make the shift, is up to $60 billion.

Scrubbers clean exhaust produced by higher sulfur fuels. There are three types of scrubber systems available: open loop, close loop, and hybrid. The system is installed into the smoke stack of the cargo ship. Some steamship lines are moving to retrofit their lines with compliant scrubbers. See how scrubbers work here.

The Maritime and Port Authority of Singapore announced recently it will not allow ships with open-loop scrubbers to discharge scrubber wash water in port after Jan. 1, 2020. The discharge ban will have a lesser effect on ships fitted with hybrid scrubber systems, which can switch from open-loop to closed-loop mode and retain their wash residues on board. Steamship lines are already announcing the change to become compliant with retrofitted scrubbers but at a steep price.

Installing scrubbers can mean taking ships off the seas, which in turn reduces capacity thus increasing cost for ocean transportation. In addition to lower capacity, the cost of scrubbers is estimated to run between $5 to $10 million each.

Two major tanker companies, DHT and Scorpio, made announcements this month that they’ll be installing scrubbers. Scorpio Tankers said it will purchase exhaust gas cleanings systems for 42 of its vessels in 2019, and for 10 of its vessels in 2020. The cost is estimated at nearly $80 million. Read more here.

The other option to meet compliance is for steamship lines to use a low-sulfur fuel that requires additional processing at plants. The plants must implement expensive plant refitting in many operations to manufacture the fuel. The end result is that the fuel will cost more. Announcements in recent months about fuel surcharges that pass along the added cost have come from major steamship lines: ONE, OOCL, Maersk, Hapag-Loyd, Kline, and more.

Since the disbanding of the TSA (Trans-Pacific Stabilization Association), standardized costs for fuel previously called Bunker Adjustment Factor (BAF) are no longer in place. This means each line or alliance can use a different formula (and phrase) to calculate the additional costs. Here are a few examples:

The new BAF will be charged separately from Maersk Line’s freight rate and consist of two key elements: the fuel price calculated as the average fuel price in key bunkering ports around the world and a trade factor that reflects the average fuel consumption on a given trade lane, as a result of variables, such as transit time, fuel efficiency, and trade imbalances between head haul and backhaul legs.

Just 52 ships (94,000 TEUs) were sold for scrap this year with 23 of those decisions made in the fourth quarter of 2018. The uptick in scrapping ships is said to be due to the new sulfur emissions regulations. This is all according to a Loadstar report that says the price tag on scrubbers is nearly equal to the cost of new, smaller 4,000 TEU vessels creating a strong incentive toward scrap, which means new steamships will be joining fleets.

What’s the bottom line for companies who do business globally? Plan for the expenses to be passed along starting in 2019. Whether a line is retrofitting a ship with a scrubber, increasing fuel charges or purchasing new ships, the cost will be added to your invoice. It is a tangible expense global companies will be paying in order to protect the planet.